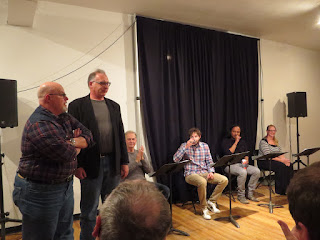 We attended the Spring Festival of New Plays tonight to see a reading of Ken Wilson's "The Things We Carry Inside". I read a portion of this about a year ago but there were many changes, in particular with the second half, since then. Some great lines and performances, especially the guy playing the old man with Alzheimer's. Very realistic pauses and moments of staring into space. Congratulations Ken, this really helped illuminate this play, although I'm wondering if it would be a better film than a play? The scene changes as time passes with either be forces or highly symbolic on stage, but could be seamlessly created on film.
Posted by Gerald Saul at 10:32 PM