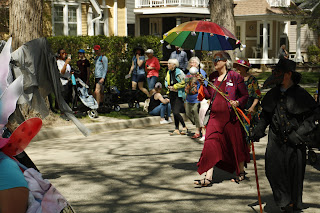 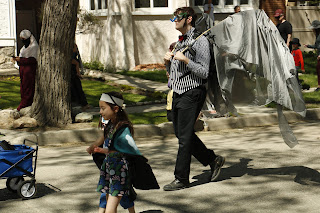 Butterflies was the theme for the Cathedral Festival this year so Margaret and William dressed appropriately for the parade this morning. The mayor came out and introduced an art flag raising and rock on rock performance conduced by the conductor of the symphony.
Posted by Gerald Saul at 10:09 PM No comments: 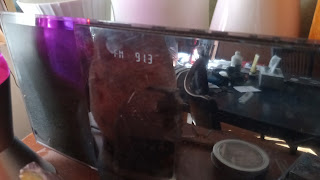 I'm William's first return guest on his radio show. We recorded on Friday and aired this morning, talking mostly about Garfield. The more I listen, the more interested I am in participating. This episode is available for the next three weeks here: SUNDAY FUNNIES ON CJTR.
Posted by Gerald Saul at 10:12 PM No comments: I've been so tired all week that I don't know how to get through my days. I've been certain something is wrong but it never seems to be covid (I've taken to doing the whole back of the throat swabbing even).
Posted by Gerald Saul at 10:10 PM No comments: 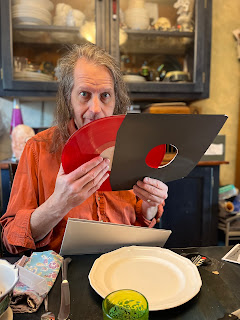 As an early Father's Day gift, Margaret and William gave me a record they ordered some time ago, the brand new vinyl release of the first Of Monsters and Men lp, commemorating its 10th anniversary. It is on two heavy, well printed translucent red records. There are three new tracks on the fourth side. We bought the CD in Iceland and I've been enthralled with them ever since.
Posted by Gerald Saul at 9:59 PM No comments:

Brenda Owens died this week. I've not spoken to her since before the big Filmpool fiasco in the early 90s for which most of us remember her. However, I do want to take a moment to remember that for a few years, she did far more good than harm to the Filmpool. She was savvy at convincing our funders of the value of the group, even when we weren't acting as professionally as we should have. She got us into the first large, useful space (1100 Broad) where Filmpool stayed for most of the 90s. 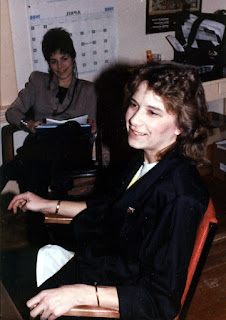 Email ThisBlogThis!Share to TwitterShare to FacebookShare to Pinterest
Labels: obituary

dad in the evening 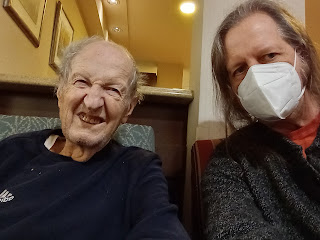 Visited dad after supper. I did some lame card tricks that I believe he could see through but was amused by the activity. Getting ready for bed proves to be a difficult time for him though.
Posted by Gerald Saul at 8:21 PM No comments: 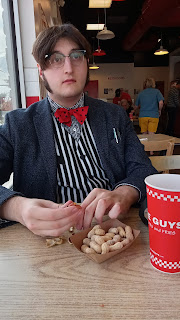 Hankering for a Five Guys burger for a while now. Yesterday I was going to come here with Geremy but I had to cancel so today I brought William while Margaret was at work. Very good. I think the spice on the spicy fries changed a bit, but it is difficult to define. The prices are up at least 20%.
Posted by Gerald Saul at 8:17 PM No comments: