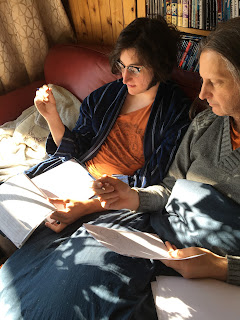 William and I hunkered down on the couch for three hours and worked through the story plans for his second Pud book today. We'd written this with Allan last  year but parts of it, especially near the end, had been rushed late at night and William has not wanted to work on it until certain things are worked out. Still a few flaws (Allan sent notes later that will be helpful), but enough that he can start.
Posted by Gerald Saul at 9:44 AM

Email ThisBlogThis!Share to TwitterShare to FacebookShare to Pinterest
Labels: Pud