William is working hard on his comic page for class but his level of detail is pushing him behind schedule. It's due in a couple of days. Probably be late. I was writing. I've been a week without playing any games on my tablet but sat with William in basement and opened spider solitaire while he drew. It proved a big distraction for him so I just headed to bed. The weather is turning hot after today but it was still quite cool, having had a strangely heavy sun shower in the mid-afternoon. 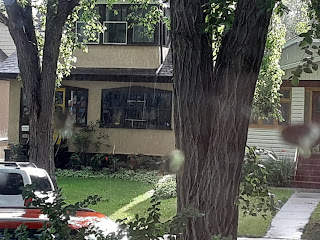