Today I worked at compiling student files into a dvd to give them so that they can have copies of each others projects as well as their own. I wonder how many ever watch them? I've been doing this for about five  years and never get feed back. It doesn't matter actually, I know it is valuable to me to have them together and I also regret not having copies of my colleagues' projects from when I was in school and would like to have had something like this. 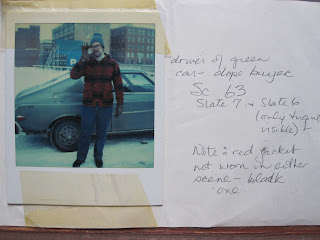 With periods of rendering and capturing time, I started leafing through junk on my office shelf and found this Polaroid photo from on the set of "Jimmy's Game", the infamous Gerry Horne Filmpool workshop film from the late 1980s. The image is the only colour photo I have of my car, a mid-70s Datsun 210 or something close to that. I can't recall who the person/actor is in front of it. I was on set one day and played an undercover cop for one shot. Rather ridiculous, even then. Margaret has always claimed that I forget colours of things and that this car was likely orange. I was delighted to have found this in a Filmpool box about 10 or 15 years ago to prove it to her.
Posted by Gerald Saul at 8:04 PM

Hey, that was the roof of the Simpsons parkade! I think I was helping to record sound that day. Or at least I was there, doing something. I believe the actor in the still was Bill Hayes.