Party at end of conference

The conference finished up nicely this morning. The only glitch today was that one participant tried to skype their talk but the signal was too weak so it was often difficult to hear. However, Everyone came out of it pretty satisfied. The final session was on comics with one speaker from France discussing "Metal Hurlant" magazine (which in English became "Heavy Metal") which brought back lots of memories. To see participants, including me, interviewed at the conference, go to the POW! website.
The group went to museums this afternoon and I collected supplies for the party. At Safeway I ran into Ron Jacobs, whom I'd just been talking about with Mazin Saffou yesterday because Mazin had interviewed Ron for the forthcoming Splice magazine. Ron still needed to send a photo; is this one good enough? 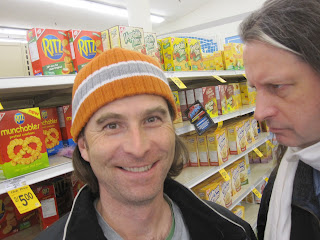 Tonight we converged on Christina's for science fiction cocktails. I took on the bar-tending role as Italian Spiderman. Mixed many things that people drank. Sweetness was rampant. The Pan Galactic Gargalblaster (from Hitchhiker's Guide) is okay but only in that it was better than some of the other things that were blue. This evening I made a much better science fiction cocktail, here is the recipe 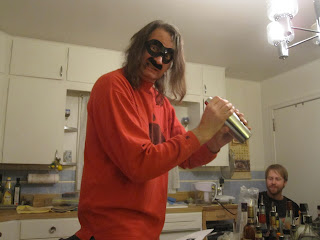