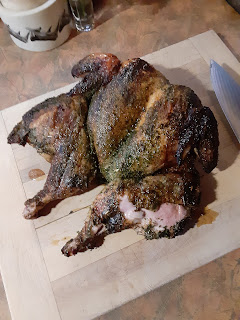 Barbecued up a pair of chickens in what William calls "fire chicken" style. It started a year or two ago when I barbecued an herb covered chicken on top of foil but at some point a hole opened in the foil and released all the grease that had pooled there and I had an inferno. Haven't set one ablaze the same way since, but the risk is always there.
Posted by Gerald Saul at 4:16 PM