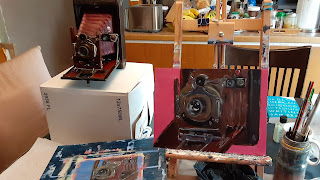 First time back at a proper movie theatre today. We went to the 9:30 pm 3D screening of Black Widow. Very small audience, two other small groups I think, so probably less than 10 people (although we paid 50 bucks for the three of us, so it is enough to keep the lights on). The film started but we could all see double. The projector was set up wrong and the 3D glasses couldn't accommodate the image separations. We had to complain and they restarted the movie after ten minutes. Overall the film was entertaining. I think it was more or less what I expected it to be - a sort of super-spy thing with some world travel and exotic crazy super-villain base that needed to be blown up.
Posted by Gerald Saul at 7:48 PM