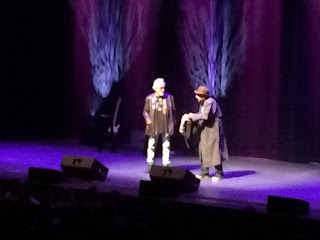 My sister bought William tickets for Cheech and Chong at the Centre of the Arts for his birthday. He and I went. This was quite a thrill, having been a fan since I was a kid. I got a turntable working earlier in the day so that we could listen to their albums to prime up for the event. The show was a bit different that anticipated, but then again we should consider that they are quite old and have done a lot of drugs, so perhaps it was more lucid and less manic than one might hope. The show was split between old routines (and they chose ones that didn't necessarily hold up well), songs (mostly their parodies of 70s/80s hits but did include a hit song Chong wrote for the Supremes before the duo got together, and monologues talking about the old days, about being arrested, about getting together, and other life things. This was the really fresh stuff that I appreciated more than the actual comedy. They were helped by Chong's wife (who acted in three of their films) and a roadie/guitarist who didn't say anything. Low key show. Once in a lifetime, but odd. 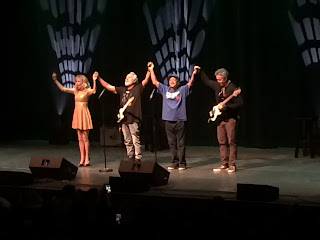