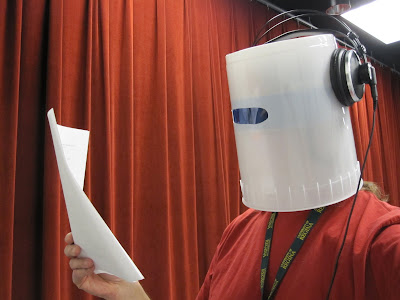 Erik needed follow-up voice work done for the scenes where my time traveler character is wearing his helmet and preparing to depart from the 21st century. When he shot it, we were running late so insisted that the character put on his helmet at the beginning of the scene rather than the end of it. After that, I just pantomimed the bits and they also used a body double to shoot extra. To get the right sound, we recorded with the helmet on. Yes, I could hear through the head set.
Posted by Gerald Saul at 11:23 PM