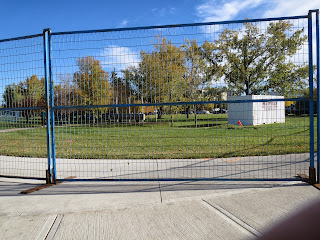 The university began to install its new sign this week. I can't wait to see it. The press is all over it for costing nearly a million dollars but I've seen the way that university money works. Most of this isn't real money, it is money moving around between departments. All construction, including design, management, and planning, are internal costs. To prevent being overrun with work, this department charges huge rates for everything. However, they also do a lot of work that needs to be done around the university on their own dime, basically subsidized by the charges they've made to other departments. The sign is probably expensive (it is large and made of metal and will have a large concrete base) but it is likely not a real million dollars. That is just the total sum being moved around, not lost. The timing of this, landing in a year strewn with the discovering of over expenditures elsewhere in the university, is unfortunate. However, I don't like the implication that the university has foolishly commissioned a solid gold sign encrusted with precious gems out of the pockets of the students.
Posted by Gerald Saul at 4:47 PM