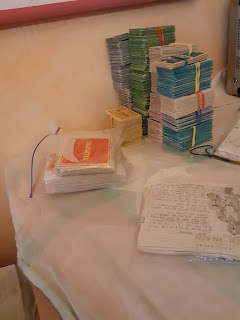 Earlier this weekend we played a bit of the game Talisman using the tabletop simulator on Steam. Geremy had never played. The original version is quite disappointing compared to Allan's mod, but we had some fun. Out of that game and conversation came the suggestion that we add Allan's modifications that he created twenty years ago (when we were all young and had endless time for such side projects). I started to scan all his cards (looks like about 2000) and Geremy is going to do the computer conversion stuff.
Posted by Gerald Saul at 8:51 PM