Today Margaret's brother came to town to help celebrate their mother's 50th anniversary of her coming to Canada. We had a big party on the farm, so I spent all day preparing and helping and attending and talking and all that. The rain threatened all day and finally started coming down about 30 minutes before sundown. The sky to the west was clear and so when the sun was setting, we got these amazing rainbows. 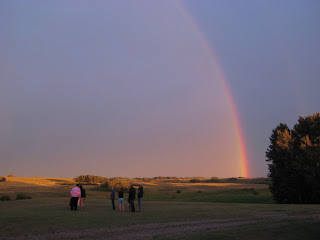 You can't really see from the photo, but there was even a second rainbow outside of the first.
I just spoke to Eric, he's preparing to do the film screenings again at midnight, but might not go as late as the other nights (3:00 am).
Posted by Gerald Saul at 10:59 PM