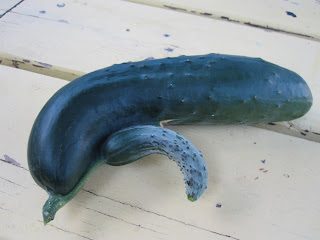 William's cousins returned to Toronto today. With all his other friends also out of town, he spent most of the day watching tv and playing video games, that is until Paul arrived with his amazing cucumber. It's like someone tried to yell "Hey Kool-Ade"  but yelled "Hey Cuke-Ade" instead and this thing burst through our wall and a huge party began.
Okay, it wasn't quite like that, but what do  you expect in this heat?
Posted by Gerald Saul at 9:14 PM