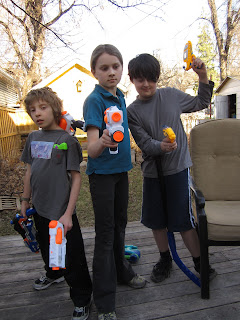 I woke up at 5 am this morning with the dread feeling that I am out of options to make my super-8 film that I'm supposed to screen tomorrow night to be even moderately entertaining. The image failed on too many levels, as have all my tests for manipulating it as a projection. However, there was an idea I'd been floating for a couple of months that I decided I could do for the event. It simply required three hours work and the ability to process the film in time. Dan had already said he'd process, so I just needed to find a few hours. This I did this morning. I also had promised to help William and his friends with their role playing game this afternoon, which went for three hours until they lost focus and wanted me to help them shoot a movie.I did so only under the condition that they all go outside for 30 minutes so that I could finish my super-8 film (which they did and therefore I did). They made a movie (I've not edited it yet, probably tomorrow morning). I took William to John Carter this evening (met up with Kevin there). Coffee afterwards. Now I've got to do my reading for the day.
Posted by Gerald Saul at 10:34 PM