Saskatchewan Gothic at the Dunlop 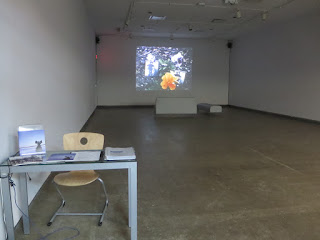 For the next week or so (until Feb 5, excluding the weekend of Jan27-29) I am included in an exhibition called "Saskatchewan Gothic", part of the Meet in the Middle project from Strandline. The sparse room creates a unique acoustic space for the soundtrack Jeff Looysen and Jon Dyck performed for these 1999 films of mine. These films are generally shown in smaller spaces, beginning with their first Dunlop show, Quicktime: The Revenge of Super 8, from 2000, where the films were shown on a small monitor and observed from the comfort of a couch in one of a number of cozy spaces that the gallery was divided into. Other screenings may have been larger, but not until now was the music played in such room that it reverberates in such a manner. I'm very pleased.
Other work include is by Ian Campbell, Mike Rollo, Amalie Atkins, David Garneau, and Dana Claxton.
Posted by Gerald Saul at 9:50 PM