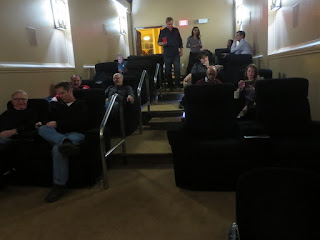 Gabriella Garcia-Luna invited us to a mini-film festival this weekend in Moose Jaw with a surrealism theme. It was more or less a test festival at a small venue and not open to the public. I had initially thought I'd just come up for one or two films but we ended up being there all day, seeing four features and eating two meals with the other participants. William was so engaged with film and conversation that we just couldn't leave. The event was held at the Grant Hotel which has a strange and beautiful 25 seat tiered theatre on the second floor with recliner seats.