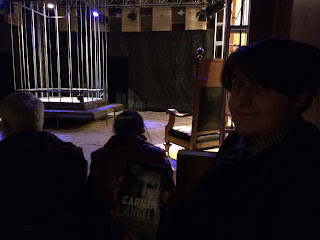 William and I attended the final (held over) performance of Joey Tremblay's play "Carmen Angel" at the John Paul Centre. The space was strange, being sort of an "L" shape so that the audience was divided into two wings, neither of which could see all the action. The performances were strong (Jayden Pfeifer never lets you down) and direction was good (Joey co-directed with Judy Wensel) but I left feeling that the script didn't do much for me. I think this is a revision of a play he wrote quite a few years ago and it seemed a bit too poetic and in the end doesn't say much. It is a bit of a murder mystery, which had a nice surprise so that was fun, but as a social/psychological critique.... I'm less certain.
Posted by Gerald Saul at 10:28 AM