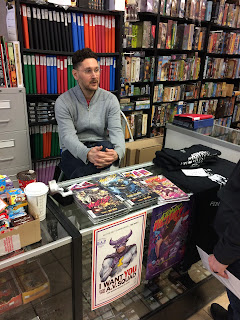 Lowell Dean launched "Atomic Victory Squad" issue number 1 today. We got the 8th last copy of his 200 copy run. I'll make sure to invest in issues 2-3 on the next crowd funding. Backstory: he had wanted to do the Wolfcop comic but the funders said he had enough on his plate making the movie so it was done by outside creators. He wanted to pitch Atomic Victory Squad as a film but was told it was too weird but might be considered if it was already a comic. Hmmm. Perhaps making it as a comic could therefore help make it as a film....? We'll see.
Posted by Gerald Saul at 3:07 PM