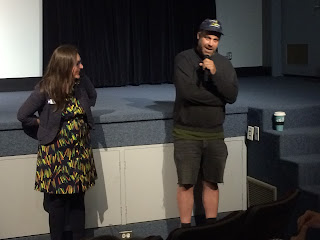 William and I caught a really fun Winnipeg film called "The Goose" at the RPL last night. The director played around a lot with mixing animation and low tech analog effects such as foreground miniatures along with hand made emulsions and radical image disruption to make a charming narrative film that had us rolling. Director Mike Maryniuk was there.
Posted by Gerald Saul at 12:09 AM