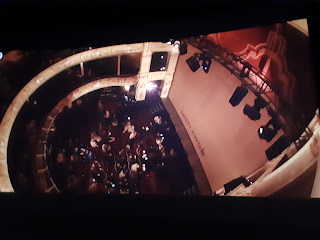 Went to see Shakespeare's "The Winter's Tale" at the Galaxy as a film of the stage play, directed and starring Kenneth Branagh. It played only a couple times this season and this looks like the last one. It was at 11 am and there was only one other person there. Fortunately the projection was done correctly (a previous time they had the aspect ratio wrong).

Drove around afterwards and ended up at the north Dunlop to see the exhibition there of work by Julie Oh of Saskatoon. The minimalist nature of it seemed more interesting online where the works I saw were isolated and provocative. I don't think it really worked in the space.
Posted by Gerald Saul at 4:45 PM