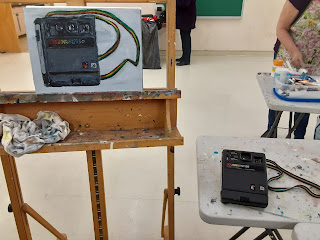 I've avoided ever having one of these cameras for years as they pop up in garage sales with the owners always saying how good they are and avoiding telling people that Kodak infringed on Polaroid's instant film patent to make this "Colorburst" camera, they were taken to court, and they lost. Polaroid made them remove it from the market and they were not allowed to sell film for it. The camera is even more useless than a standard 8 or a 110 camera which at least can be loaded with expensive custom film. It is equally useless to the camera they allowed owners to trade it in for, the infamously shoddy disc film camera (which I also borrowed from Richard - coming soon to to a painting near me).
Posted by Gerald Saul at 10:12 PM