Color out of Space 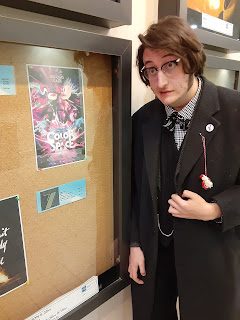 H.P.Lovecraft's "Colour out of Space" was adapted into a feature with Nicolas Cage last fall and it finally opened at the Rainbow. We attended opening night. Allan came along. It was pretty good, probably the best Lovecraft film I've seen in a long time. Some reviewer said that it seemed like each character was acting in a different film but this is one of the things that made it work. They seemed like a real family, a bunch of related people who, unlike the stereotypes, did not all think and act the same.
William was working on his chalk drawing again today, home only for this weekend.
Posted by Gerald Saul at 4:36 PM