I'd rather have the half dozen 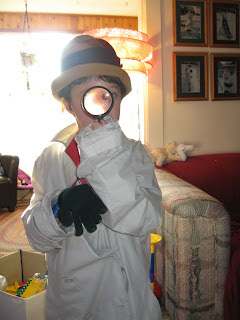 It's Sunday and I spent the afternoon with my son in the edit room working on our latest Inspector Gadget video. This is our fourth and by far the most complex. He plays the inspector as well as his evil twin from the first Disney movie and I play the villains. William loves the two live action Gadget movies and has not seen the cartoon series except in passing (if it's on TV, I've not made the effort to find it). I tend to agree. The insipid Don Adams version just makes you want to kick the TV, there is no sympathetic side to his character. You find yourself cheering for the Claw. The first live action version is all about identity conflict and strength versus strength of character. While certainly a juvenile version of Robocop (could be called Robocopy), it did have some clever moments in its writing. In the Gadget video I was working on today, we had gotten away from the two or three person cast and had recruited additional cast including artist Chad Jacklin whose playful machines based upon the future we hoped for in 1955 became the secret gadget lab. He was very kind to let us come up and shoot one day a month or two ago in the upstairs gallery at Mysteria on 13th Avenue. Anyway, instead of this being the usual 1 hour to shoot plus 1 hour to edit video, it has turned into a 14 minute epic with dozens of effects using green screen, After Effects animation, and miniatures. I guess other dads play catch with their five-year-olds, I make movies.
Posted by Gerald Saul at 4:31 PM