Due to the odd twist of the schedule, I taught my second Film 411 class this evening but still have not taught my first Film 400 class of the term.
Margaret finished the puppets for my Sock-vlle video series today. There were four characters that never had puppets previously. Otherwise, I'm re-using the others from 1994. 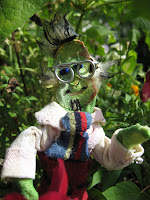 I still haven't recorded the voices and I still need the buildings made or drawn, and then all the animation and stuff, but still I feel good about there being progress. Now it's time to dig into old photos to give Chrystene some ideas for what the characters in my version of A Midsummer Nights Dream should look like. I thought it might be fun to have some of them modeled after people I know, but now I'm wondering if that is only going to taint my perception of those characters? Oh well, I'll certainly be happier than if I just had them all look the same.
Posted by Gerald Saul at 10:43 PM