My horoscope this year says that I am a born executive, which isn't bad, but not as good as last year's where I could control time itself.
It was the last day of Film 401 today, watched works in progress (or at least some of them). We did our own class picture with 35mm film, but I accidentally overexposed them all but a few stops so I'm not sure they are salvageable. I'm still sick, although perhaps not as bad as yesterday. Margaret is a fountain of illness, so we didn't do much after I got home except eat the cake I made yesterday and hang out a bit. William lost one of his upper front teeth finally, now he's waiting for the tooth fairy to come. 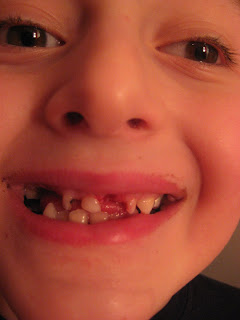 He's got his Easter/spring break starting after tomorrow, so he made another really great card for his teacher. He also had his last day of swimming with the school today, parents were invited to come and watch although few did. I went. Mostly they did some lame jumping in game; Margaret says it was much less active than usual, no real show. He had fun.
Posted by Gerald Saul at 10:12 PM