I think I've picked up a bad case of cat head.
The long awaited new Lego Bionicle movie: "The Legend Reborn" came out today. I picked it up first thing this morning and William watched it twice after school. I caught it the second time. It was all right although at times it was quite sloppy. Two scenes in particular bothered me. In one, the main character is in a cavern of ancient technology and triggers a gateway to open. He is surprised and jumps back. The scene then cuts to the group of characters 2/3 of the way down the stairway with the opening far behind them. Where was the moment of nervous first steps into the darkness? Cutting room floor? Later when two of the heroes have been captured the same main character declares that he will go alone to rescue them and the other heroes must stay behind to protect the villagers. He then turns and exits amid musical cues that lead us to believe his new mission is under way. Cut to him standing on a hill side watching the sun set and one of the characters from the previous scene walks up behind him and says "I thought I'd find you here" and they have a chat about the likely position of the hostages. Very obtuse. All the key creatives had European names. All the actual animators were Asian. I sense some major disconnects in the production.

William finished reading the 760 page "Harry Potter and the Order of the Phoenix" this evening. He started it on July 9 and has now started the sixth book. 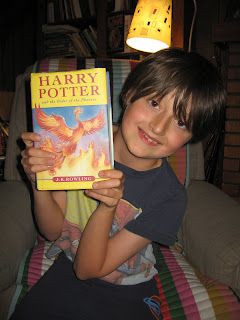