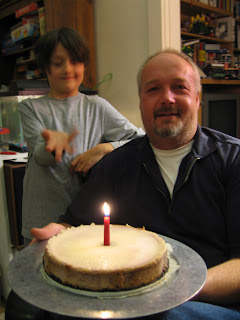 William seem to have had a really good day, which I've very happy about because he's been having too many bad days lately. He brought samples of grain to school that he collected from the farm and he got to do a 20 minute presentation to the class where they sat and quietly listened to him. This is when he shines. Later on I asked him about singing "O Canada" in Cree, which I know they had been learning with the first teacher. Although he has a good ear for music and an amazing memory for words, he has claimed that he doesn't know it. I then offered to buy him a chocolate frog (which come with one trading card of a Harry Potter wizard in each pack for SIX DOLLARS) if he could sing it. After about 10 seconds of thought he rattled it off. We picked up his frog from Dessarts on 13th avenue on the way to his acting class at the Globe. Margaret and I went shopping and bought the ice cream attachment for the Kitchenaid mixer so we can finally make ice creams without all the additives. Margaret's brother came over this evening, having finished the harvest last night at midnight, and had some birthday cheesecake that I made last night (a particularly good Saskatoon berry one).
Posted by Gerald Saul at 10:01 PM