The catfish has been out of sorts the last few days. I think it is a combination of him being overfed and being lonely. We stopped feeding him and today he started being active again, proving this to be in part true (he was always very active when he was hungry then docile after eating). This evening we bought two swordtails and he is much happier and active already. They require warm water, which is something he likes as well, so I also got a heater. Cowtown had one that was much cheaper than the others because it was some random shipment they weren't supposed to get (fell off the back of a tanker from China?), so it was six bucks instead of thirty. The fish cost three dollars each so not a big investment but certainly worth the extra over the 49 cent goldfish if they manage to live more than a month.

Sylvie the cat is also doing great. She is a bit insecure about being apart from us which is fine since that means she doesn't wander far when we let her off her leash. She's still mostly an indoor cat but she likes being outside with us and she climbs the treehouse and goes under the porch and deck (she's only 1/5 the size of the old cat so can go amazing places). 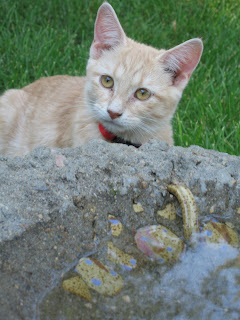 Email ThisBlogThis!Share to TwitterShare to FacebookShare to Pinterest
Labels: Sylvie the Cat