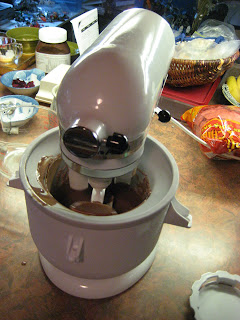 Between yesterday and today I made some authentic Italian gelato. I roasted the hazelnuts and simmered them in whole milk (brought up to Italian whole milk standard of 3.7% rather than the 3.25% of Canadian whole milk), then pureed them and drained all the milk into a bowl and discarded the nuts and used the milk in the recipe. Add egg yokes, Belgium chocolate and vanilla and a lot of straining and simmering until the mixture is finally left in the frig for a few hours. By this time it was too late to make gelato so it sat and waited until this evening and I broke in the Kitchenaid ice cream maker (prepared the day before by putting it in the freezer) and finally, after about 18 minutes of stirring, it was an amazingly edible substance.
This evening, before the MacKenzie opening, we finally cleaned the fish tank. We've never let it get so dirty as it was now; I had to use a glass scraper to remove algae from every surface of the glass and then scoop it with the net. I'd delayed the cleaning because I didn't want to suck up the baby fish. There were three remaining about a week ago but now there are two. They are getting pretty big. About ten days ago the swordtail mother died, I have no idea why. She'd been swimming around with her head facing the surface for a day, then that was it. I can't find that as a symptom on line but her gills were red and that could mean ammonia poisoning, so our long delay in the cleaning was probably the culprit. The two young ones seem strong and active and are growing really fast.
I talked to the lab (Technicolor) in Vancouver today. My answer print of my new film, Grain: summer (I Can't See the Forest Through My Dreams)" should be shipped to me on Monday. It is playing in less than two weeks at Antimatter in Victoria. I'm excited to see it; it sounds like the timer spent a long time trying to make it look just right (a challenge with my work since there is no "right").
Posted by Gerald Saul at 10:02 PM