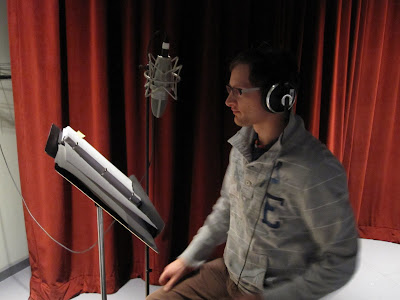 Today we recorded Marita Clark as the Baroness (she's in the class and did the role brilliantly with a British accent) and Jason Shabatoski as the Baron. I've wanted to put Jason in something for years. He acted in a dozen student films when he was a student nine years ago. I included him as a silent image as one of my Modern 15 Minutes of Famous series, but his talent is certainly in his voice.
Posted by Gerald Saul at 9:50 PM

Email ThisBlogThis!Share to TwitterShare to FacebookShare to Pinterest
Labels: Sockville