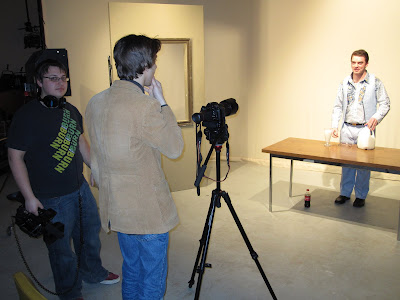 This afternoon we recorded Stephen doing the voices of the Hopstein Twins today after he finished working with Erik on the continuation of Erik's project (which Stephen co-wrote). It seems that I didn't take any photos behind the scenes.

This morning William and I finished watching season 4 of Dr. Who. It's strange that I'd forgotten what happened in most of that season, even though they were really quite good. William has now seen all of the episodes except for the scary Mars episodes in season 5, the two "stone angel" episodes, and the ghost episode in season one, although i think I'll bring that one out sometime. We are ready for the new season to start in a few weeks.
Posted by Gerald Saul at 9:43 PM

Email ThisBlogThis!Share to TwitterShare to FacebookShare to Pinterest
Labels: Sockville