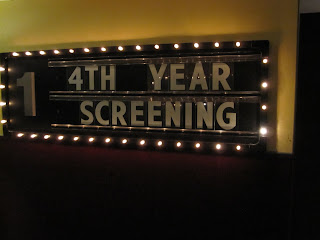 This evening the first half of the fourth year films were screened at the Rainbow Cinema. They got a great crowd. I arrived late so a few seats had opened up but initially it was beyond the 150 capacity. The last film of the night was Erik Sirke's film which I acted in back in January. It turned out quite good anyway. Lots of fun.
Posted by Gerald Saul at 9:56 PM