Today was the 8th anniversary party for the Artist Trading Card (ATC) group that Margaret is an organizer of. I finally started on some new cards although only one is ready, the first card for series two of my Rerun: Canister the Robot collages. Here is the central image: 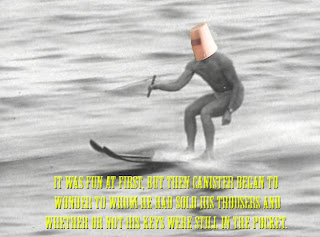 I also spent a lot of time stressing about the video files for the choral work on Courtney Milne scheduled for later this week. The videos I've been sending to David Gerhard have gone into the dropbox as 720x480 but he downloads them and they then seem to be only 1/4 that size. I changed compressors a couple of times and as inexplicably as it started not working, it started working.Is it another mac/pc thing? I don't know.
Posted by Gerald Saul at 11:58 PM