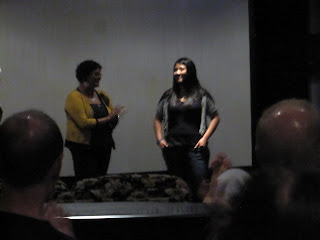 I attended the opening night of Queer City Cinema. The screenings are at Neutral Ground, which is no where near as big a venue as some previous years. The style of films has changed quite a bit over the years as well, with far less shocking material and much more earnest calls for change. Candy Fox, a student in our program, had one of her videos shown this evening. It was well received and after the screening she led a Q+A which primarily focused on the idea of being "two spirited".
Here is my thoughts on the films.
Posted by Gerald Saul at 9:30 PM