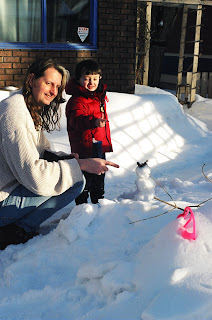 When William got home from school, I took him to the university and we recorded the story he has been writing. All of the students are recording their stories, but mostly they will be using the built in microphone on a laptop in the classroom, and having had to listen to such recording handed in from students working last minute, I want no one to suffer this any more than possible. Besides, William's story is an epic 6 single spaced typed pages and even once I trimmed down the little mistakes, breaks, and longer pauses, it runs 23 minutes. Awesomely random.
I also imported ten rolls of photos from 2004-2005 that I found discs for (they were rolls of 35mm film). Here is a sample from February 2005:
Posted by Gerald Saul at 10:58 PM