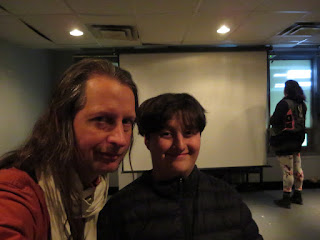 William and I attended a screening of short films from Quebec at Neutral Ground: NEW CARTOGRAPHY: Digital Humanities and Realities curated by Lysanne Thibodeau. Frequently at screening events there, we arrive late and don't get to sit down. Fortunately for us, although a huge shame on our city, the screening was very poorly attended and we had numerous picks of seats. Brenda started the evening with a good spirited greeting to the crowd which, at that moment, was William and I (as we were trying to summarize our new idea for a 1980s Canister and Friends revival). The low attendance was all the more the shame as these were really interesting films, mixing short dramas, an insightful animated documentary about childbirth and mothers' feelings after giving birth, experimental films including a new one by Steve Woloshen, and some rather entertaining dramatic works. On top of all that, they had sandwiches catered by Italian Star. Wow on top of wow.
Posted by Gerald Saul at 10:15 PM