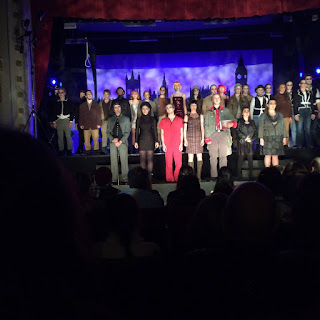 We went to 3Penny Opera performed by Do It With Class at Darke Hall. While the cast was entirely made up of teenagers, the performances were amazing. Costumes and performances were all strong and we really enjoyed ourselves. William and I watched the Pabst film last week and this was a great complement to it, giving us the songs in English and twisting some of the plot points from the film (probably following closer to the play). It was great to see that they didn't censor it, allowing teenagers to swear and drink and (offstage) engage in other "adult" activities. Bravo.
Posted by Gerald Saul at 8:45 PM