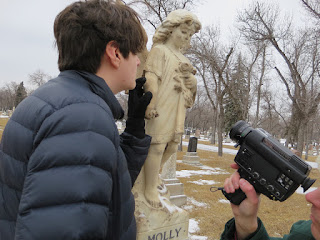 Today I took William to the cemetery to shoot a new version of a film I've not had in distribution for many years. I followed many of the original motifs and rhythms so that it would match Jeff's music he recorded for the original, but with some different choices for light and composition. I'm not sure if it is better or not, but we had a bit of an adventure. I shot the first roll with my Eumig but it started failing. I don't think it is the batteries; perhaps a connection somewhere. I've had that camera for about 40 years so I suppose I could put it on the shelf now.  I finished the shoot with the Sankyo I bought a while back; wonderful lens but no single frame capability.
Posted by Gerald Saul at 2:47 PM