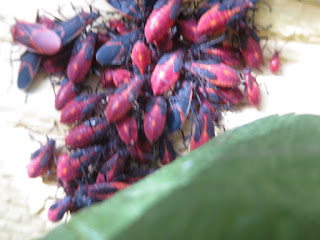 In 2001 or 2002 we had swarms of these "maple bugs" on our garage. I filmed them extensively and used them in my 16mm film "Toxic 6: Final" (which was actually the second of the six films that I made. They must live in cycles as I've not seen many over the past decade until this year. This is just a single blob of them.
Posted by Gerald Saul at 2:24 PM