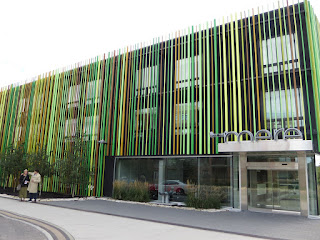 We got a slow slow start heading to Winnipeg. It was a bit of a last minute plan as we wanted to catch the Chagall exhibition at the WAG before it closes in a couple weeks. Margaret has been nursing a big scrape/burn on her leg this week and decided to have it checked by a doctor at the clinic before we left. She was told it is healing well, but that took over three hours so we didn't arrive at the hotel until it was getting dark. We booked the Mere Hotel on the waterfront. It was very cool. We were trying to decide if we should eat at the cafe which is about 30 feet out the back door when we heard a noise. We found ourselves standing in the  rain, crowded under one umbrella, watching the fireworks explode over the Forks. Nice night (cafe was good too).
Posted by Gerald Saul at 7:38 PM