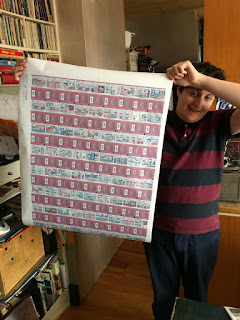 A while back, frustrated by having purchased over 1000 pieces of Dubble Bubble gum without having found all 60 comics, I wrote to the Tootsie Roll company (who purchased Dubble Bubble a number of years ago) to inquire about finding the missing ones. After a bit of email exchange, we received "the complete set of Canadian comics printed in colour on plain paper from the printing company who produces the comics"!!! I didn't entirely believe it would come when he said he'd send this, but today it did! The surprising thing is that the wrapper is printed on the same sheet as the comics. The other surprising thing, which helps explain a few oddities, is that the comics are laid out in a nine by nine grid which means they print 81 comics, not 60. There are still only 60 different ones, but 21 of them, chosen with no clear agenda, are printed twice on the base sheet, making them more common.
Posted by Gerald Saul at 3:16 PM

Enlightening. I'm putting together an article on bubble-gum inserts for my comics website, and this brought me up to speed and opened my eyes. So why some inserts (or trading cards, presumably) are more common than others. How long ago did you start attempting to collect this Pud series? Your initial blog entry has a date of 2006.