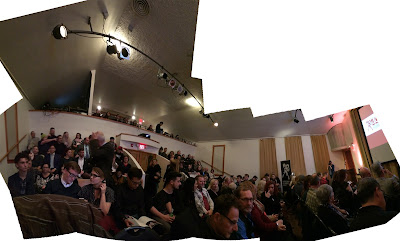 The SIFA awards were this weekend. I went alone as William was sick and Margaret had multiple commitments and I was up for best short film for "Eyes of Sorrow Moon", although I didn't expect to get it (and I didn't). The award went to one of the only two films featured that I'd not seen; Mattias Graham's "Gas Can", a rather foreboding drama about a first nations man (played by the ever-convincing Simon Moccasin who was overlooked on the nominations for best performer) who walks onto a farm to borrow gas. The tension seemed to lie in some unspoken past between these two men, a abuse or a grievance that neither say out loud. Added to that is the viewer's awareness of the Saskatchewan shooting that came out of just this sort of event (which the film does not reference as it had begun production before this real life event). I'd like to have had a relief from the tension in some way at the end, either through violence or humour, but he relentlessly leaves us hanging, gagging on the unspoken words.
The other film that premiered was Ian Campbell's "The Flats", another of his amazing abstract semi-narratives with peculiar performances taking place in a digital environment. This one was a bit more minimal as Ian located all the action in three rooms, each placed above the other, where three individuals (a punk rocker, a minimalist, and a cockroach - all played by Amber PB) live, perform, and respond to each other. The images is manipulated to take on the look of a line-drawn animation. The minimalist surges, as if she were part of the electrical system. The cockroach hoarder who lives with unstable stacks of boxes on the top floor is certainly references Kafka. With this in mind, I'd like to have seen a longer version of this character, struggling with balance, with an endless amount of time but with time never on its side. Having just finished reading "The Castle", I'm feeling very interested in the sensation of frustration. Perhaps a director's cut in the future?
I was also the presenter, on behalf of the Department of Film, of the best student film. This went to Layton Burton for his very strong memory/portrait of his parent's unorthodox marriage. Congratulations to Layton and to all of the other students who were nominated.
Posted by Gerald Saul at 11:45 PM