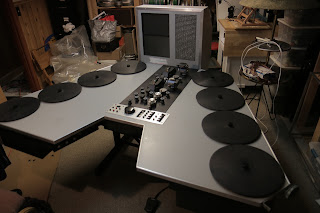 One of the first things we moved into our house in 1996 was the 16mm Ginny flatbed editing table that I'd purchased from the Filmpool earlier that year and that they had purchased (or been given) from CKCK-TV a few years earlier, in the early 90s. When they first had it, Chuck Gilhooly and I were the only two who really embraced it. When we'd finished the projects we were working on, the machine more or less collected dusk until they declared they needed the space more than the machine. I bought it for $500 (which I believe might have been what they paid for it) and moved it into my parent's house as I had just finished grad school and we were sort of homeless. After we got our house, I had movers take it to the basement. It is actually too big to fit down the stairs so we needed to detach it from its stand while they held it up, then run the stand down the stairs ahead of them so they could place it back on its wheels at the bottom. Quite a feat given that it is a pretty heavy beast.
Anyway, it is built to tilt upright for storage so I did that about five years ago and have not used it since. I reassembled it today to take another look and consider finding a new home for it (an reclaiming that part of my basement). The internet tells me almost nothing about this machine. 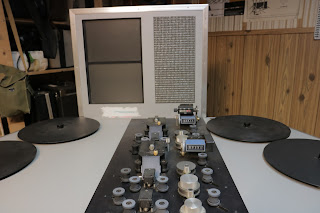 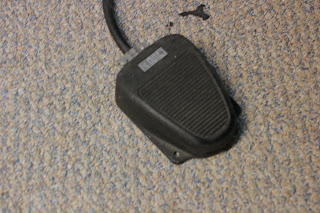