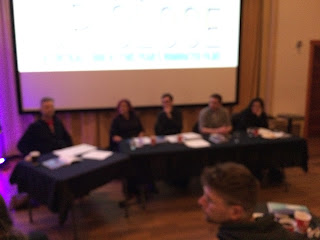 Filmpool did a new thing this year, the SIFA up close talk. They selected four learned people to each pick three of the nominated films from the night before and talk about them and lead a discussion. It was a bit of a mixed bag but overall quite a smart idea. It was three hours, which is a bit exhausting, but events like that are needed sometimes.
Posted by Gerald Saul at 7:47 PM