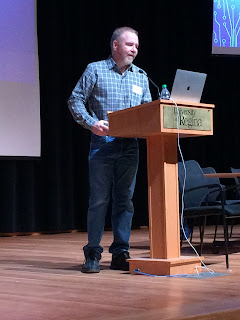 The computer science department brought in a very successful alumni as key note for their fiftieth anniversary gathering. Plummer was a high school classmate of Margaret and Mike's, which was the impetus to go. Margaret was sick and didn't attend. William and I saw Mike and Andy there, as well as my old friend Scott. Dave Plummer spoke very quickly, probably a nervous response to being a bit out of his element, but the talk was entertaining and enlightening. It's true that some luck came into play in his career, but also a shitload of talent and hard work.
Posted by Gerald Saul at 2:44 PM