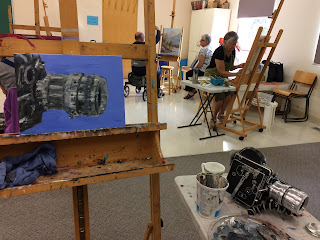 For the first time, I have repeated a camera that I'm painting. This isn't because I've run out but because I'm committing my Monday paint sessions to the Bolex, in particular to an old Bolex I own that has a large zoom lens affixed to it. Today I did just the lens and I worked only with a large (1" wide) brush. It was a nice new challenge. Ward said I did well.
William had his first session at physio, even though his doctor doesn't want him doing any actual physio until the metal has bonded firmly with the bones. Margaret took him while I painted. Meanwhile, her collage collective were hanging a new set of works in the hallway without her. One of her pieces was assembled with magnets and proved unmanageable and was not hung. 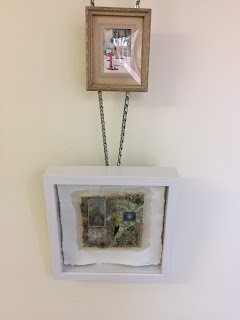