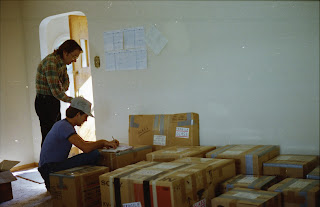 Remembering Szymon Choynowski today.  It was 10 years ago today that he took his own life, hanged himself in his house in Mexico City. That's not what we should remember, but it's difficult for me not to perpetually maintain that association. He had reached out to me and re-connected nine months before that date and we corresponded on and off up until two weeks before his death. Looking at the messages now, they are incredibly unnerving. He had some very positive days and shared some great memories, but overall his narratives are peppered with despair. When I shared stories from people that he knew here, more often that not he had either forgotten them or remembered some negative trait that he perceived in them (their breath, their smirk, etc). There was a job opportunity here at that time and he was momentarily excited about it, but quickly lost his enthusiasm and made me drop the subject. I think about him frequently as someone I loved being around, someone I wished I would be like, and someone I'm grateful not to be like.

His friend Mark Bloom sent me this obituary today.

Szymon Choynowski, later Simon Chase, died ten years ago, 11-22-11. His aesthetic sensibility influenced many. His taste was unwavering and was expressed with little delicacy. His sense of humor was unforgettable and infectious despite one's attempt not to fall into its depths. His exacting eye and ear for English prose was amazing and usually correct though not always current.

At CalArts in the 1970s, he was briefly bassist for The Poetics (Mike Kelly, Tony Oursler, et al.) and one of the most well-known students. After graduating, he began teaching in Canada. According to Gerald Saul, a filmmaker and educator and former student of Szymon's—see Saul's homage at http://geraldsaul.blogspot.com/2012/10/szymon-choynowski-obituary.html

when the university finally offered him tenure, he promptly resigned. [...] he liked to be anonymous [...] However, after a couple of years of teaching, he began to encounter people who knew him almost everywhere he went. [...] He was very popular with the students [...] listening and caring about people's ideas. [...] I feel privileged that I had become his friend [...]

Simon moved to Montreal, then Vancouver, and ultimately to Mexico City to take care of his parents. His mother was an artist. His father, by then blind, had been director of the Psychometrical Laboratory of the Polish Academy of Sciences, a younger friend of Witkacy (Stanisław Witkiewicz) and older friend of Stanisław Lem. In 2010, Szymon visited Poland for the first time since childhood to scatter his parents' ashes in one of Warsaw's lakes.

Another of Szymon's former students:

I learned many things from him but most of all I felt heard. He was a great listener. I never felt judged by anything I showed in class or spoke of in his presence. He seemed to be interested in what I was thinking [...] As a film professor, I strive to be the teacher I always wanted as a student. I work hard to be supportive, attentive, non-judgmental, and authentic. Szymon was all of those, and it might be that I emulate him more than I know.