This morning I was able to look a couple of scenes in progress from Chrystene Ells' "Sisu" production. 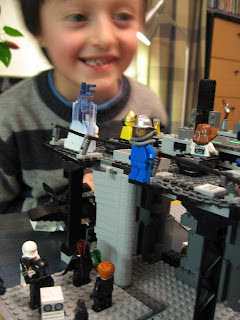 It's looking quite good. Of course, it's hard to tell with just a couple of scenes, a feature needs an overall rhythm and tone that takes quite a while to get right. Hopefully there will be an overall rough cut in a month or so and then she'll have a better idea where she stands.
Got William "new" skates today, traded in last years so it was a good deal. He's got a skating date at Teagan's 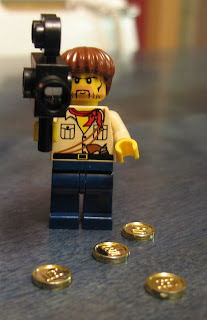 tomorrow after school, which is of course going to end early as its the last day before the Christmas holiday. This evening William and Paul worked on modifying his Lego Batcave into a Lego Star Wars set, with amazing success! See the attached photo of the station where Vader fights Luke and Chewbacca is at the controls. R2D2 and a stormtrooper and a rebel fighter are standing by beside the fight. William doesn't own any actual Star Wars Lego (yes, they make a lot of it) so I was extra surprised. I took part, building a Lego George Lucas, but William didn't want to have filmmakers, just real Star Wars, so he took George's head off.
Posted by Gerald Saul at 9:10 PM