William went to Gavin DeLint's son Jack's fourth birthday party today but was in a bad mood the whole way there. I assumed it was because he'd been up late last night (nearly midnight) but as he attempted to sleep on my lap (quite out of character) I began to suspect he was also sick. We exited after the cake and went home where he suggested that he get some rest. I installed him with another Animorphs book (the 39th he's read) and a hot water bottle and went down stairs to roast a pheasant. When Margaret got home she noticed it was cold in the house. We quickly determined that the furnace wasn't working (it had been first thing in the morning) so we called the guy. He came fairly quickly, while Margaret was out getting cat food because our not-so-picky cat refuses to touch the new brand we bought a few days ago, and he finished before she got back. There was a chunk of dryer lint covered insulation lodged in the air intake and that made a switch trigger. That was a $133 piece of lint. William finished the whole book by mid afternoon and started to feel better. He stayed up late again, starting his 40th Animorphs book. We have three more out from the library, then we are out of avenues to get more unless we start ordering them on=line. There were about 60 of them in total. 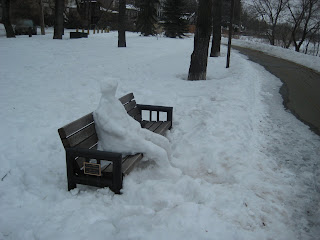 Paul called to direct me to this snowman, his face is plain snow, perhaps it melted off, perhaps it was never there. It was directly behind Allan's house.
Posted by Gerald Saul at 12:01 AM